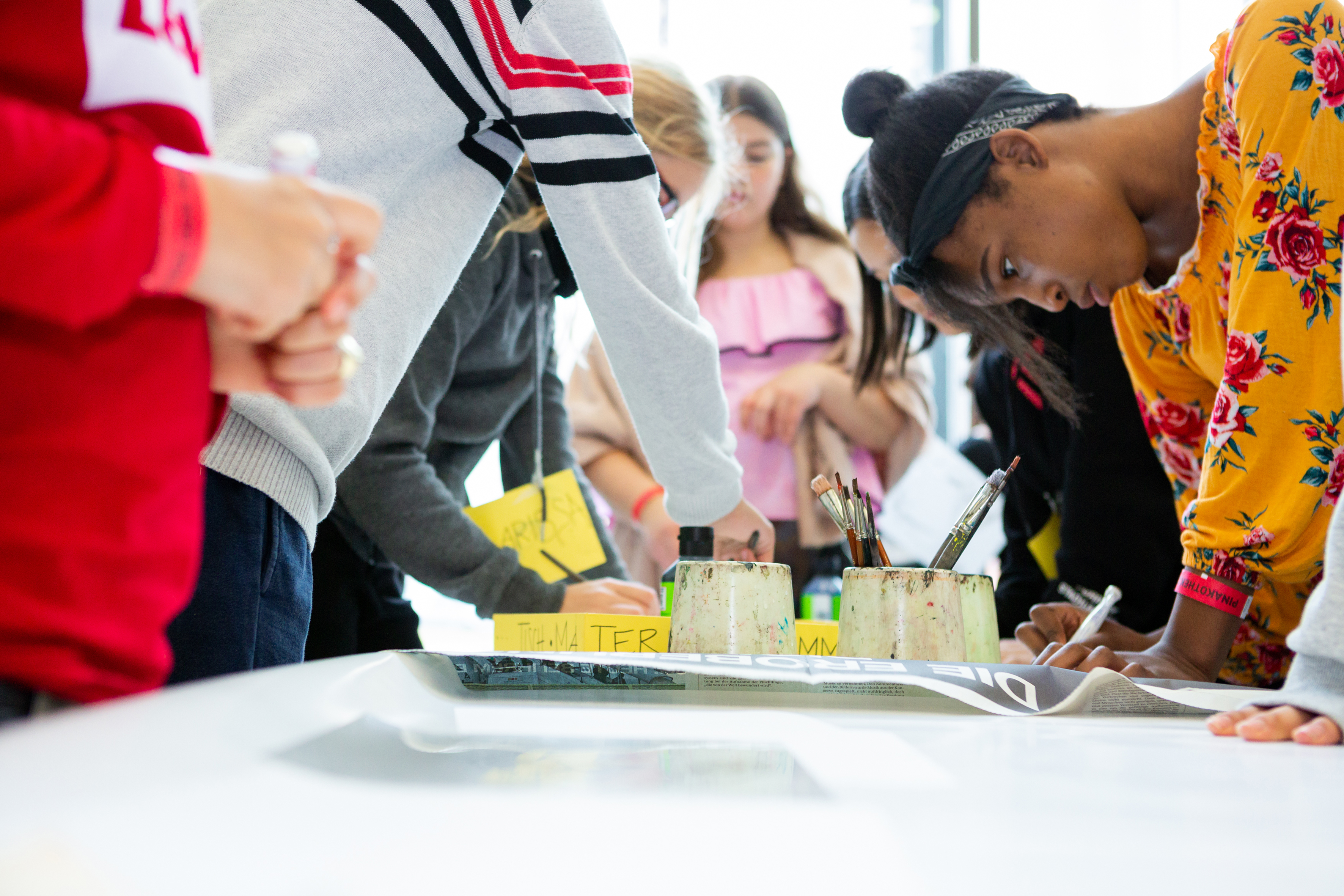 „Yes, we’re open!“ – this is very much what our intercultural workshop on art appreciation  – “KunstWerkRaum”– is all about. Our programme addresses all persons interested in communicating with – and through – art in the widest sense. As such, it is designed to create a maximum pool of languages possible. And by this we do not just mean the spoken word, but language in all its imaginable forms.

And so within in a workshop group there will usually be a variety of mother tongues coming together. And even if the members do speak one and the same language they will nevertheless find that older persons will express themselves in a different way to the younger ones and use different wording.

All of us are familiar with the concept of language barrier  – namely the notion that languages and their differences can isolate us from one another. When this happens, the remaining common denominator becomes so small that we are unable to communicate properly with each other.

However, we do not intend to concentrate on the deficits, the differences in our language and on our ways of speaking but rather on what we share in common and where we have points of connection.

All of us like to articulate our thoughts, so are capable of language. And the actual ways of HOW we express ourselves are as varied as the people who come together in the workshops of KunstWerkRaum. When we view a piece of artwork, it provides us with a great opportunity to demonstrate our thoughts. What the viewer as an individual is contemplating can in this way be experienced by all visually.

A joint confrontation with art such as this offers the potential to achieve something on a collective basis that the individual observer is not in a position to generate. This encounter can be made to work if we are prepared to explain and share our perspective with others – whilst at the same time recognising that equally every other perspective, which is presented, should be seen as an illustration of reality.

Bringing art to life through sounds.

Each of the “KunstWerkRaum” workshops is devoted to a particular theme. And although the chosen subjects may well be repeated on a regular basis, experience shows that on every occasion they have the potential to produce very different outcomes.

At the end of January 2019, some ten participants came together to attend a “KunstWerkRaum” workshop dedicated to the unconventional motto of ‘bringing art to life through sounds:’ (“Die Kunst zum Klingen bringen“).

Point of departure for playing out this theme was the “KlangSpielPlatz“, which, thanks to cooperation with the Schauburg  – a theatre in the Bavarian capital Munich that focusses on young audiences – was on display in rooms of the Pinakothek der Moderne.

The first session began with each of us bringing our names to life through sound so that participants in the group could introduce themselves to one another. We were each handed two drumsticks and “interpreted” our names in the rhythm of our choice, which the other group members then had to repeat. The group subsequently practised performing, imitating and combining different rhythms – something that we all enjoyed very much. Following this rhythmic session to get us into the mood, we visited the accompanying exhibition to view specifically pictures by Kandinsky and Franz Marc – large-format paintings with their broad range of bright colours and abstract forms. Some of the participants in the group had already seen the pictures. Nevertheless, we as a group chose not to describe them in terms of content or form– at least not in words.

Using simple copy paper, we translated the bright colours and dynamic language of forms facing us on the canvas into sounds of all kinds. The participants proved to be highly creative in doing so. The paper they had been given took on such features as wave-like movements, was crumpled, torn or suddenly stretched or bent – according to which particular element of the picture was to the one to be expressed. Seldom had I approached an abstract artwork in such a simple – and at the same time – sensual and effective way. A verbal description was not necessary to express what each of us saw.

However, we did subsequently speak about the works. The picture ”Fighting Forms“ by Franz Marc evoked amongst the group a wide variety of associations: – on the right, a dark “whirlpool “ that appears to be moving “slowly“, “gloomily “ and “menacingly“; and on the left, the red “loud”, “explosive“ form, which resembles flickering flames. That the latter form would be the force to ultimately win the fight was something almost all of us in the group could agree on. Filled with impressions, images, words and sounds, we finally went on to the ‘play’ area of the “Klangspielplatz”, where, in a huge spiral, we found discarded instruments, fragments thereof alongside materials, tubes, wires and metal sheets that had been converted into sound-emitting bodies. Now it was time to divide up into teams of two and create our own musical composition based on the translation of the picture we had seen.

This gave us an opportunity to get to know somebody new, as, we were told to choose a partner whom we had not known before. As a result, this led the little girl in our group to let go of her grandmother’s hand and team up with the chief art mediator. And the two men from Afghanistan, too, who had come to the workshop together, also split up to form a new twosome team. Each of the pairs that emerged from these new constellations then practised a short piece based on their musical dialogues with the aim of bringing to life through sounds the ”Fighting Forms“ as they imagined them.

In the final session we presented our compositions to the group. The participants listened attentively; keen to hear what the others teams had made of the exercise, Five dialogues emerged from ‘Fights“, which, for the most part, differed both in their dramaturgy and in the chosen instruments. All of the performances earned a round of applause and words of praise. This last exercise left me, and presumably the other members of the group as well, with the great feeling of having achieved something creative that was then to be presented to the others.  This is also a very powerful form of language, and one that everybody can command.